Most Challenging Work Environments in the World — Part 1

This article originally appeared at soneticscorp.com.

Sometimes, calling work environments “challenging” is a matter of perspective. A Wall Street trader hammers away at phones and computers furiously trying to squeeze the highest margins out of every second of the day. For him, his air-conditioned cubicle is a brutal work environment. However, he can’t fathom the notion of working in an environment as harsh as the construction worker’s outside his window. From her precarious perch on an I-beam, while building the skyscraper next door, she can’t fathom the idea of being confined to an air-conditioned office every day.

And a bad boss, well, that makes any work environment challenging.

But there are some work environments that are objectively challenging. These are places where people work every day. As experienced as they are, one misstep, lapse in concentration or change in the weather can result in disaster. Some people love the challenge. Some endure it out of necessity. Either way, they put their lives at risk every day when they go to work.

I set out to find the most extreme of the challenging work environments in the world. Here are the first five.

Some mines are more dangerous than others. The Nailakh coal mine in Mongolia is deadly not only because of the standard hazards miners face, but also because it’s an illegal mine. Safety and engineering are mercenary and there is no official number of injuries and deaths due to lack of oversight.

Then there’s the Mponeng gold mine in South Africa—the deepest gold mine on Earth. The Wall Street Journal published an excerpt of Matthew Hart’s book, “Gold: The Race for the World’s Most Seductive Metal,” that you need to read. It’s a fascinating description of Hart’s 2.3-plus mile descent into the mine, including details about how the mine is cooled and the illegal “ghost miners” who hide out in the mine’s 236 miles of tunnels until their skin turns gray.

But the most challenging work environment for miners is the Zasyadko coal mine in eastern Ukraine. What makes it so dangerous are the “naturally high levels of gas (particularly methane) and coal dust explosion hazards.” Hundreds of workers have died in the mine, including 158 in 2007 alone and possibly as many as 32 in 2015. 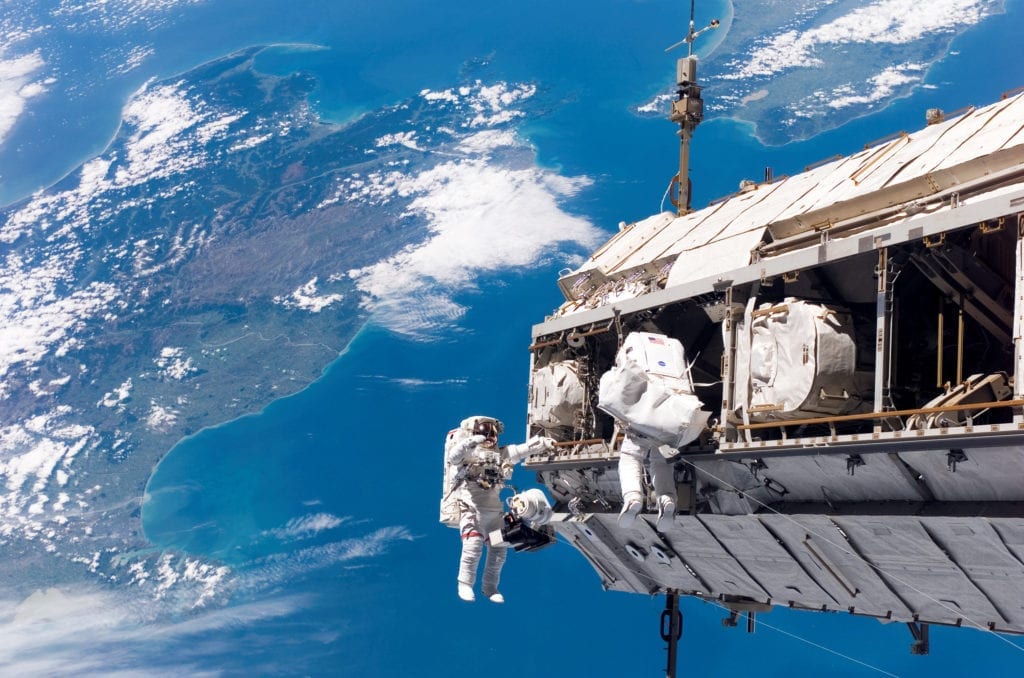 To date, only three people have died in space. In 1971, three Soviet cosmonauts perished when their Soyuz 11 capsule accidentally vented its internal atmosphere into space. They died within seconds and are believed to be the only humans to have been completely exposed to the vacuum of space.

When you consider how unforgiving space is as a work environment, it’s amazing that only three people have died from space exposure. There’s no oxygen and no gravity. High-energy photons and energized subatomic particles mutate DNA. Temperatures range from -250 F to 250 F. There is no deadlier work environment where man has yet toiled than open space. On the plus side, the commute to and from the office is never boring. Hundreds of thousands of fishermen, roughnecks, tug operators, and other able crew call the ocean their office. There’s bounty to be had, but the unforgiving seas don’t surrender it willingly.

As if their jobs weren’t dangerous enough, they have to work sometimes thousands of miles from the nearest help. They may as well be in space if their craft sinks in cold water. Even if they survive the cold shock response, have a floatation device to help through cold incapacitation, and stave off hypothermia for three hours, there is little hope of rescue. Immersion or survival suits improve their odds of survival, but by that point, survivors are at the mercy of the sea, its inhabitants and the strength of their beacon. In overboard accidents when the ship or rig remain intact, the likelihood of survival is still only 70 percent.

Groundfishing in the Atlantic and Dungeness crabbing off the Oregon Coast have proven to be especially dangerous in recent years. However, year-in and year-out, the most merciless fishery is the Bering Sea. Even though its high seas, rogue waves and freezing temperatures provide conditions utterly inhospitable to humans, $1 billion worth of seafood—representing about half of the U.S. catch of fish and shellfish—come from the Bering Sea every year. Farming is hard, rewarding work. Growing something from nothing; creating food and flower from the land is both a family business and a multibillion dollar industry. The dangers involved aren’t always obvious, but perhaps the more deadly for it.

The deadliest farm implement is surprisingly common: the tractor. According to the Centers for Disease Control, of the 374 farming-related fatalities in 2012, more were caused by tractor overturns than anything else.

Of the five work environments mentioned in this article, prisons have to be the least rewarding. Miners have their claims. Astronauts get adventure. Fishermen work on the open ocean and experience the rush of the catch. Farmers reap their harvest.

As a correctional officer, your life is your reward. Even if you survive the workday, the stressful work environment may impact the rest of your life. Correctional officers have higher-than-average rates of substance abuse, PTSD, divorce, and suicide.

Prisons are stark, institutional environments where the unpaid interns are violent, desperate and untrustworthy. In 2011, “correctional officers experienced 254 work-related injuries per 10,000 FTEs due to assaults and violent acts.” For all other professions, the average is only seven.

There’s no shortage of dangerous prisons around the world where correctional officers have it extraordinarily tough. With reports of a prisoner-to-guard ratio ranging from 92.5:1 to 140:1, La Sabaneta in Venezuela may be the most dangerous work environment for a correctional officer on the planet.